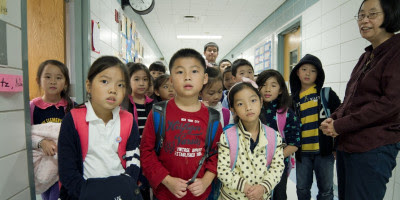 Incredibly weak collection of shorts, especially from DOC NYC, about people going to differing countries for a better life. only GOING BACK HOME and SATELLITE BABY are worth seeing.

LOOKING AT TIME: PORTRAIT OF A WATCH-portrait of Salim Shariff who does watch repairs in Jackson Heights. This is too short to be much of anything.

NOT SO NAMASTE- portrait of Ella Cojocaru who was a Romanian gymnast who found healing in Yoga. Its an okay film that never fully links the two parts of her life. How does she get from one to the other? No idea.

MARATHON- Portrait of an undocumented man from Ecuador who loves to run. Its okay.

RESIDENT ALIEN-After Carlos's friend is killed by a gang in front of him, he is given the choice join the gang or be killed. Instead he leaves home and comes to America

GOING BACK HOME- one of the lost boys of the Sudan works to make enough money to return from America and rejoin his family. The one must see film in this collection thanks to a really great and engaging person.

SATELLITE BABY- Lois Lee talks about the changing nature of the Chinese immigrant children in Flushing who are being sent back to China to raised and returning years later feeling completely alien. This is a really good film but this need to be more than a nine minute film.

THE ABSENTEES-The plight of some Muslims stuck in Dubai.

This collection plays Thirsday at DOC NYC. For More information and tickets go here.
Posted by Steve Kopian at November 15, 2015