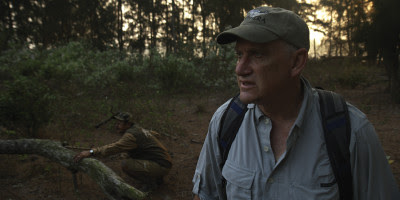 Portrait of Dr. Alan Rabinowitz tracks the tigers of the Sundarbans which is along the border of India and Bangladesh. Rabonowitz is trying to establish if the area, which has the highest number of tiger attacks every year, is the place with the best chance of assuring the tiger of survival.

Gorgeous nature photography mixes with a Rabinowitz's must too earnest pleas to save the tiger makes for an odd mix. While I absolutely love the look of the film, Rabinowitz's words wore me out since he never seemed not to be on and not pushing his point. I'm not saying that we shouldn't save the tiger, rather I'd like a film where the man at it's center is human being who has more to him than his mission

Its a good film but with a tad less hammering it would have been a great one.

The film plays tomorrow at DOC NYC. For tickets and more information go here.
Posted by Steve Kopian at November 17, 2015