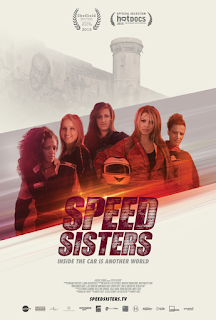 My thought while watching Amber Fares' Speed Sisters was, somewhat ridiculously, "This would make a great movie."

After all, it has all the elements you need -- women who represent several archetypes, from the sweet tomboy to the wild child to the glamour girl -- as well as rivalries from within the group and from the outside. You have women trying to prove themselves in a male-dominated sport while dealing with the conflicts in the country they live in. Like all good sports movies, it builds to a final showdown.

But of course we already have this movie. It's called Speed Sisters. It's the exact one I was watching. There's no reason to make a fictionalized version of it when the truth is this great.

Following the first all-woman street racing team in the Middle East, the Palestinian Speed Sisters were (at the making of the movie), Marah (the tomboy), Noor (the wild one), Betty (the glamour girl) and the elder Mona (who we don't see that much of in the movie, honestly). They're led by their steely and smart manager Maysoon.

The documentary is divided nicely between the racing action and the interpersonal (and, well, international) drama. Marah has the full support of her family and it's wonderful, but she begins to butt heads with Betty, whose blonde hair and good looks makes her the group's sex symbol. Noor is more interested in learning drifting than she is in racing (and often screws up on the track).

Although the Israeli-Palestinian conflict is not ignored (the women have to deal with checkpoints and bombings while trying to find places to practice), it's not anything the movie dwells on. It's just something these women and their families deal with every day of their lives. Quieter moments showing Marah and Noor celebrating Maysoon's upcoming marriage give an insight into just how close these women are.

The rivalry between Marah and Betty may be played up on the screen (while they're on the same team, they're competing for title Fastest Women Driver), but Betty is never painted as the enemy. Both she and Marah are forced to navigate rules that are constantly changing and judgments that can't be questioned. Still, the movie is pretty clear about who it's rooting for and who we should be too.

Speed Sisters is thoughtful and fun. I adored the time I spent with these women and I loved getting to know them. Watch this before the inevitable Hollywood remake happens. I can't imagine it could be improved upon.

Speed Sisters has one screening at DOC NYC on Saturday the 14th . For tickets and more information go here.
Posted by Eden at November 13, 2015