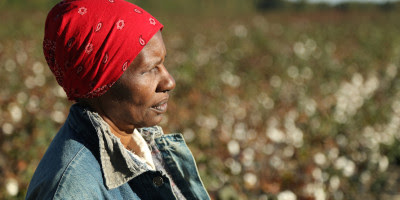 Wilhemina Dixon is a 62 year old woman who is speaking out to anyone who'll listen in the hopes of stopping AIDS and ending it's stigma. Dixon is fighting the fight because her daughter and granddaughter who have the disease and they live in rural South Carolina meaning they have almost no health services.

This film came together when one of director June Cross's students at Columbia told her that one of the leading cause of death for black women in South Carolina was AIDS. Investigating the story further she ran into an article about Wilhemina  and her family. This lead her down the road to discover how rampant the disease is in the American South (there are more cases than in NY and San Francisco combined) where some some counties have no doctors or hospitals people are left to fend for themselves.

This is a portrait of the new face of AIDS, poor non-whites. As one woman says the film went from being a disease for gay white males to exploding in the center of the Black community where it is destroying people left and right. At one point some one said that if you are poor and black your life expectancy is a mere five or six years. The disease that many in the great urban centers had thought was under control.

This is a moving film. Its an emergency siren of an unheralded tragedy in the making. Its a film that grabs you by your head and heart and insists that we get off our asses and actually do something.

This hour long documentary kind of transcends any notion of being critical. Playing like an hour long episode of say PBS's Frontline show, what the film is showing us is much too important to worry about the perfect flow of the story or if we have all the details we would have liked. The truth be told is that people are dying and it has to stop and if you want to know why see this film.