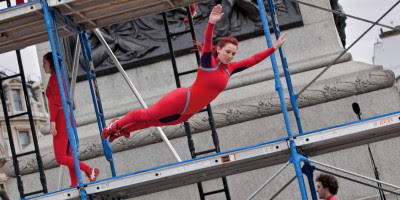 This is a film about Elizabeth Streb's company and their performance at the London Arts Festival that took place during the recent Olympic Games. Streb and her performers did some amazing things at 7 London landmarks.

This look at how the performances came together through their performance OXD is everything you'll ever want to know about how the daredevil dance pieces that had them hanging from buildings, bridges and Ferris wheels were put together. The point where the film truly kicks into high gear is in the final 40 minutes when we get to watch the performers perform.

The trouble with the film is that the first hour, while very good if you don't know Streb, kind of pales when compared to last year's BORN TO FLY: ELIZABETH STREB VS GRAVITY. I know the earlier film is the whole life story of Elizabeth Streb, but at the same time I got more out of it then I did  watching the rehearsals for these seven pieces. To be fair I think it has to do with only wanting to see people fall on their faces on a mat a certain amount of times. (I completely understand a film should stand on it's own but sometimes the over lap of films does affect how one feels)

On the other hand once the troop hits London and they begin performing this film truly soars and you'll be thrilled that you're seeing this on the big screen-its just way cool..

OXD plays one time on Saturday at DOC NYC. For more information and tickets go here.
Posted by Steve Kopian at November 10, 2015