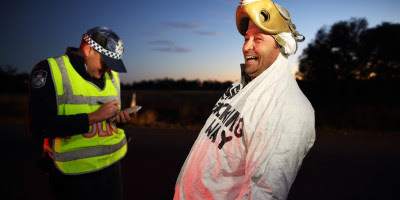 Dayne Pratzky bought some land in Tara  and left Sydney Australia.  He was a kind of pioneer. Then word came the gas company was coming- and the thought of jobs and money was great, except that things went wrong at the start. First came the noise, and then the company came in and tried to bully him into taking a well on his land for a pittance. Pratzky got pissed and fought back becoming an activist along the way.

If you are following the various stories about the troubles with fracking then you'll have run across similar tales, but rarely one with some one as compelling as Dayne Pratzky. Pratzky is the sort of character made for the movies or TV and he's the reason that you'll want to see this film even if you're sick to death of anti-fracking pieces. More importantly he's the sort of guy you want to hang out with so any time with him is time well spent.

Acting as a sort of one stop clearing house for fracking, this film will tell you everything you wanted to know about it and entertain you at the same time. It will of course also piss you off.

I had not been planning on seeing this film, but a slot opened up and I figured what the hell I'd give it a shot. I'm glad I did because I really liked the film. Definitely a good way to start off a weekend at DOC NYC

The film has one screening at DOC NYC on Saturday morning. For tickets and more information go here.
Posted by Steve Kopian at November 10, 2015