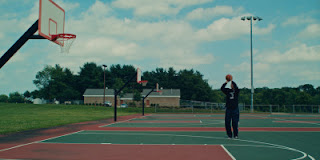 Portrait of  Lloyd Swee' Pea Daniels, a basketball phenom who's career derailed almost as soon as it started as his substance abuse and persona problems caused him to get bounced from team after team, but who's skill on the court made him someone that was too good to pass up.

Good but unremarkable portrait of a man who is considered by some to be one of the best to ever play the game. Hitting all the right notes of  a sports legend bio the film is full of lots of footage of the man playing, lots of talking heads speaking about Daniels and his life as well as the man himself filling in his side of the story. Its very well done but it's hampered by the fact that there is something about Daniels that isn't always likable. He's a nice guy but there are moments when he grates. Considering his life it's understandable but it makes it hard to watch. I'm not sure the upside of the film is worth the down.

Worth a look if you like the man or basketball.

The film plays tonight and 19th. For more information and tickets go here.
Posted by Steve Kopian at November 17, 2015