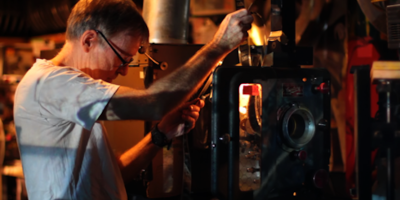 I loved this film a great deal. What can I say I'm a film geek. When I was a kid I wrote a letter to the local movie theater and asked to see the projection booth- guess what they let me go up there. And for two hours I talked with and tormented to projectionist as he showed me everything there was to know. He also gave me several rolls of film that had movie trailers (The Godfather 2, a promo for a summer of Disney double features and a PSA with Henry Fonda). Seeing this film I was a kid again.

As much as I like this film I'm unsure how the general mass of humanity is going to react to the film. As one of the people in the film says a lot of people don't understand the mad passion for film so when she would describe film projection as being better than sex she got weird looks.I on the other stand completely understood what she meant. If you know what the magic of touching film is then you have to see this.

I also suspect that the film may lose some people with its 95 minute length, on the other hand the look into a disappearing way of life and a look at an into the old movie palaces may keep them enthralled because the visuals are frequently really cool- it made me Oh wow frequently.

This was one of my must see films at DOC NYC and its one of the better ones. If you have any love for the movies, specially the old ones and the history of cinema this film is an absolute must.

The film gets a single screening at DOC NYC Wednesday. For tickets and more information go here.
Posted by Steve Kopian at November 16, 2015