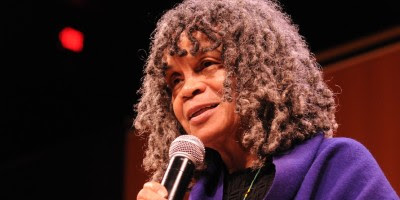 I was once asked Why do you write? I wanted to explain how I became this woman with razor blades between her teeth- Sonia Sanchez

Portrait of poet Sanchez who was one of the founders of the Black Arts movement and was a major influence on Hip Hop.

I like the woman, I like her poetry. But there is something about the film that didn't work for me. I suspect that its simply that the balance between material on Sanchez's life and that of her words is out of whack.  The film feels like a giant free form expression/performance of her words where these biographical and contextual bits have been dropped in making it feel like the director didn't know which way to go.- Do I run all of the poetry together with Sonia going through her life or do I try to give you a bio of her? The result is the film doesn't feel like either and is just okay instead of something that soars or sings.

While I'm mixed on the film as a whole, I find it to be a kick ass introduction to the woman and her poetry and influence. If you couple it with HUSTLERS CONVENTION which also played DOC NYC you'd have a killer examination at the roots of Hip Hop

The film plays tomorrow the 18th and Thursday the 19th at DOC NYC. For more information and tickets go here
Posted by Steve Kopian at November 16, 2015