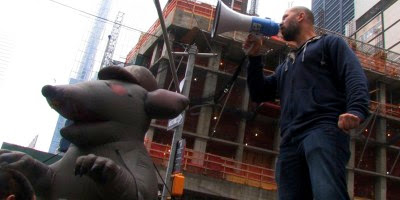 SUPER UNITS- a building deigned by Le Corbusier is a machine for its residents. A visually arresting tour of the building will look great on a big screen.

LENNY AND THE RAT-a man uses an inflatable rat to draw attention to the use of non-union workers. An good look at the rat that I've seen all over New York over th last few years.

S-THE MUSICAL SHUTTLE- a good look at the buskers who perform on the S shuttle between Times Square and Grand Central. Its the the most lucrative route in the whole subway system.If you've ever taken the shuttle you'll have seen these guys.

The collection plays Sunday the 15th. For tickets and more information go here
Posted by Steve Kopian at November 09, 2015