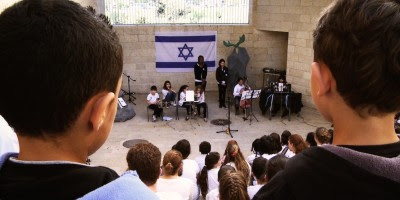 Filmed over 3 years Danae Elon returns home to Israel, and Jerusalem in particular. Wanting to return to the country she always considered home despite not living there for 20 years she waited until after her father's death to do so. Her father, a well known journalist had become disillusioned with the country and didn't want her daughter to ever go back. Packing up her partner and her children and heads "home".

Melancholy look at a quest to find home and at the state of Israel. Its a sad but enlightening film that raises a lot of questions on any number of subjects. Pick a subject involving Israel and family dynamics and you'll find it in this film. One of the things I like is that the film clearly shows what happens when one partner returns to their "home" while the other remains an outsider. Danae's husband loves her but at the same time he never feels as though he fits in. There is a moment early on when she asks him about how he feels about being in Israel and he says "lonely". Later on he kind of explodes and lets loose on how after 3 years he still feels like an outsider and he explains why. Sometimes people don't belong somewhere.

I don't know how other people will see her but to me Danae isn't particularly likable. Its clear that he partner and kids lover her but in the film she comes off way too self absorbed. Why is she doing what she is doing and why is she dragging everyone along when it's clear on some level no one is happy?  I find the final lines of the film, spoken by her son telling, in that he too is tired of her self quest and wants her to stop filming him.

To be honest I don't know how I feel about the film. Its too slow and too low key for my tastes. Its kind of maudlin from the start. Worse as I said above I don't particularly like the director who ultimately comes off as a kind of an ass to put everyone through this (audience included).  Despite some interesting exploration of themes and ideas, I found PS JERUSALEM too much navel gazing.

The film plays tonight and Monday at DOC NYC. For more information and tickets go here.
Posted by Steve Kopian at November 14, 2015