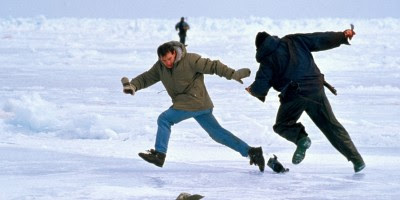 A look at Brian Davies and the International Fund for Animal Welfare as they try and stop the seal hunt by exposing it's cruelties and make people fall in love with the animals.

There is very little I can say about this film, not because it's bad , rather this is the sort of film that is going to have a limited audience. This isn't to sell the film short, I don't want to do that because it's very good and has some truly spectacular images of the seals and the arctic; rather it's that this is a film that is going to play to a certain audience. If you are pro-animal rights or love seals you're going to want to see this film and join in its plea for animal rights. On the other hand if you aren't one of the converted or you don't want to see seals being killed odds are you're going to take a pass because after a while the film is simply preaching to the choir. Personally I liked the film but I was kind of done after a while and didn't need to see the whole 90 minutes because the film had made it's point early on.

The film gets a single screening tomorrow at DOC NYC. For tickets and more information go here.
Posted by Steve Kopian at November 13, 2015