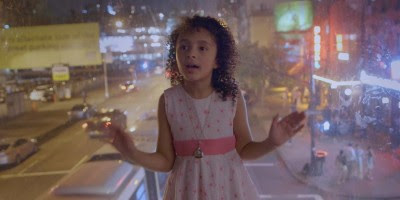 When I first read the description of CLASS DIVIDE I thought it was going to be about inequality and gentrification in New York City as a whole, but it just sticks to one block in Manhattan. On one side of 26th Street and 10th Avenue are apartment projects, called the Elliot Houses, and right across the street is a private, very expensive school called Avenues (think they said it's 40k a year). The documentary goes back and forth, first with kids from Elliot House talking to the camera, and then with kids who go to Avenues.

They also spend a lot of time in the documentary, discussing the Highline, how the developers were able to create it (took them years and a lot of fighting) and what it did for the neighborhood (higher priced luxury buildings for one!) Meanwhile, 40% of low income housing is gone since 10 years ago and rent is rising.

The film spends a lot of time talking to Rosa- a young girl from the projects, who is so cute and likable, not to mention a good speaker! She's very thoughtful, she knows her family doesn't have much money, but she dreams of going to Avenues. (Avenues is supposed to give scholarships to people in the Elliot Houses..so I am crossing my fingers for Rosa, that she gets one one day) She really was the heart of the movie, I loved her parts. Her brother Danny has a dream of becoming a self made millionaire.

One of the girls at Avenues is Yasmin who is curious to learn about the divide from Avenues to the Elliot Houses. She creates a project called 115 Step Project (the number of steps between Avenues and Ellion Houses). She goes to the projects and talks to the people there to learn about them and also to learn about how they feel about Avenues being there. She invites them over for a tour and to also photograph them. To the kids from the projects, they see Avenues, like a museum. I felt, although they were curious of what it was like inside, it was sad,because it shows them what they don't have.

I enjoyed the movie, though of course a sad topic. While this documentary, dealt with one single block in New York City, it really is New York City as a whole that's changing. A movie every New Yorker can relate to. Things that had been around for years, closing all the time

CLASS DIVIDE plays today at a sold out screening (Standby tix maybe available at the door) and 19th at DOC NYC. For tickets and more information go here.
Posted by Steve Kopian at November 15, 2015