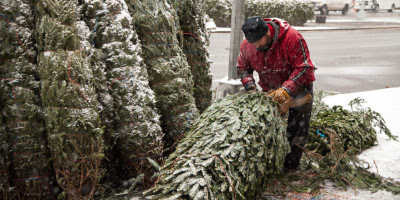 Portrait of François and other men and women who descend on New York City between Thanksgiving and Christmas and live in vans and sell Christmas trees to the city's inhabitants.

This is a solid little film about a slice of life that most people don't really think about. Its good time with interesting people, who you come to like and make you wonder why they selling Christmas trees when they could be doing something else. Then again it is a great way to meet people and interact.

While I like this film a great deal I can't help but wonder if this would have been a better film shorter.  Its a question I'm not to certain about the answer of because I've seen more than a few dramas and comedies over the last two years that over the same subject (ALL IS BRIGHT and CHRISTMAS AGAIN being two that spring to mind). While the other films are fiction and TREE MAN is real life, the similarity wore on me. That said TREE MAN is light years above the other films and if you're going to see one film about Christmas tree salesmen, this is it.

My own problems aside this is one worth seeing.