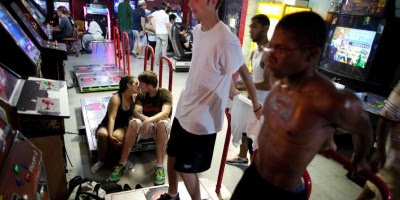 This is a look at the Chinatown Fair which was opened in the 1940's as a a kind of indoor carnival. It evolved over time to become New York City's longest surviving video game arcade. The film is a look back at the arcade by some of the people who used to hang out there, as well as kind of overview of video games in New York.

Despite spending a lot of time in Chinatown over the last 20 or so years I only went into Chinatown Fair once or twice largely be in an "arcade" because arcades had disappeared. When the film was announced for DOC NYC  I asked Mr C, who had spent a great deal of time there, to take a look at the film and let me know what he thought. I posted his thoughts in our curtain raiser because I wasn't sure if I was going to get around to reviewing the film. He said:

The Chinatown Fair on Mott Street was a dive of an arcade in lower Manhattan that was ultimately competing with the neon giants of gaming arcades that were propping up in Times Square. My memories of the Chinatown Fair was during the 80s-90s when it acted as a place of refuge for gaming & time away from the hustle and bustle of Chinatown while I wait for my mom to end her shift working at the sewing factory on Lafayette Street or when my Dr. Toothy dentist visit ended the grinding & clamping sessions early. What I experienced at the fair included watching a culture of passionate fighting game enthusiasts start to brew to catching wannabe Chinatown triad rebel rousers passby the arcade to take a break, or simply those just curious of the Live Tic Tac Toe playing Chicken! THE LOST ARCADE documentary brought back memories of a lost but not forgotten New York.

As someone who isn't well versed in the arcade my take was slightly different. For me the film is an uneven look at the arcade and a few of the people who went though it's doors.

The film started as part of an effort to document the arcade which at the time was rumored to be closing. Director Vincent Kurt began filming in the arcade in order to make a record of the place which meant so much to him. Through that experience he connected with several other people and the tale of what the arcade was for them emerged.

As a slice of life and portrait of a moment the film is very good but over long.As the film stands now it would be a really good short, but the problem is that the film wants to be something more with the result that the film kind of drifts.

For the film to work as feature it really should have given us more of the history of its subjects. First the film should have rooted itself more into the history of the arcade and of the neighborhood. Yes we get some of it but I know from reading and seeing other accounts of Chinatown there is more to it than we see. The fair was there for 60 years so there has to be more to the back story than what we get.  The film could have used more in the history of arcades in NYC and in general, especially since the film talks about Chinatown Fair in relation to other places in the city. In many places there isn't enough meat. What is here seems to be more off the cuff explanation of everything and it works against the film.

I like the film enough that I want it to be better. I know it could be better.(And unfairly the films flaws seem kind of glaring when compared to a few video game/arcade films I've seen recently)

Reservations aside this is a good look at a slice of New York City life that has now passed away.
Posted by Steve Kopian at November 19, 2015