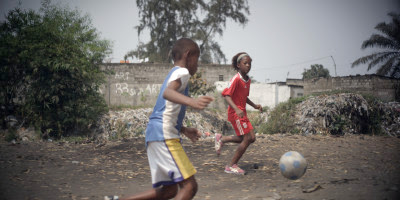 Absolutely wonderful film about play in human and animals and an attempt to explain why we do it.

The film is a mix of university professors and regular people talking about the evolution of play and of of games involving balls and along the way it reveals a natural and sociological history of human and animals. The talking heads make this a film that should be shown to parents everywhere because it says that we need to play because it's good for our brains. The notion of a ball is something we all need to have because we need to play. Its a truly universal shape and its something that all have a need to play with- or even watch, since the film says that the same part of the brain that are fired when we play are fired when we watch.

All the talk is illustrated with some really cool and truly stunning images of people and animals at play. I'm not sure if some of the games we see have ever looked this good and inviting. Its so cool that I'm seriously considering seeing this again on a truly BIG screen because the images in this just made my jaw hang  open. I also need to see the film again because there is so much in its 72 minutes I know I missed stuff.

I love this film. Its just a blast. Even if it is ultimately a bit more for the head than the heart there is still enough to touch the muscle in the middle of our chests to make it sing.

One of my favorite films at DOC NYC.

The film gets a single screening Monday night. For more information and tickets go here.
Posted by Steve Kopian at November 14, 2015