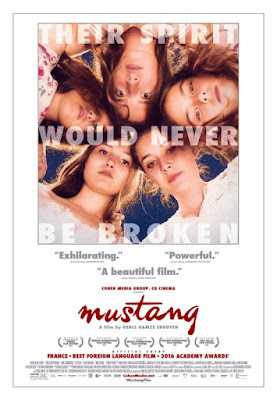 MUSTANG was like watching a nightmare. The movie isn't scary per say, but the subject matter is very unsettling.

MUSTANG takes place in Turkey. The film starts off with a group of girls(who we later find out are 5 sisters) leaving school with some boys and going to play in the lake. When they get to their home, an older woman starts yelling at them and one by one locking them in a room and beating them. I was as confused as they were, as to why this was happening. They kept yelling "what is this about??" and they protested and wouldn't let her grab the other girls. She then says that a woman down the street said they were being promiscuous with the boys. They were shocked because they were just playing with them and it wasn't anything "dirty".

The next thing you know, this woman, who turns out to be their grandmother, as their parents both passed away turns the house into a prison. Putting up bars so they can't escape, not allowing them to leave or go back to school and then bringing over women to teach them how to be wives..how to cook, and sew. At one point they do escape(to go to a sports game), and the uncle who also lives there, winds up putting up higher and higher walls. The custom is that once a girl reaches a certain age, she has an arranged marriage. One by one this happens to the girls and it was hard to tell what the timeline was..if they just married them off one after another, or if they were actually getting older (not much time had passed between each one and when they were starting to try to marry off the even younger girls, it was disturbing). One of the girls is in a relationship with someone, but the grandmother says if she ever wants to be with him they have to get married, so at least she has a happy ending..the others are just set up with whomever. Some rebel and some don't. One girl befriends a nice man with a car to teach her how to drive.

It was enraging that the girls didn't try to fight what was happening to them. I wanted to shake my fist at them. I was surprised that they just went along with it. The story really shows oppression of woman. The movie was good, but definitely not a happy good feeling film, though I did have hope for the youngest one, She was a fighter!
Posted by Steve Kopian at November 20, 2015