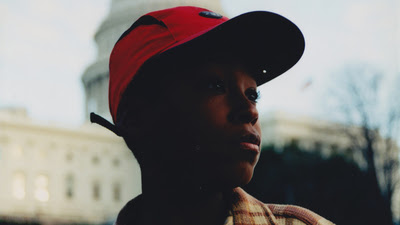 17 BLOCKS exists because years ago director Davy Rothbart gave Emmanuel Sanford Durant, the brother of his friend Smurf, a small video camera to play with. Emmanuel fiddled around with it and recorded life with in his family. He then shared the footage with Rothbart. As time went on both Emmanuel and Rothbart chronicled more and more of the families’ life. Even in the years after tragedy struck Rothbart kept filming.

Beginning with the first footage shot by Emmanuel and continuing until the summer of 2018, 17 BLOCKS is the story of the Sanford Durant Family over almost two decades. We watch as poverty, crime and addiction batter the family and bring it to the breaking point but never allowing them to lose hope for something better.

I think that 17 BLOCKS is a momentous cinematic achievement. An in your face and troubling look at a family on the edge it picks you up and batters you for 96 minutes as a life that is alien to the vast majority of the people seeing the film unfolds before them. I doubt that most people attending the Tribeca screenings will have to worry about where the next meal is coming from or whether they will get shot on the street for winning a pick-up game of basketball, and if they do ever consider them it is in the abstract. 17 BLOCKS will open their eyes not just by showing that life but making us feel it and understand it as if we were their ourselves.

What begins as watching the home videos of a random family slowly over the running time becomes time hanging out with the family. The Durants become people we know and care about. We feel their pain because in some small way watching the family over the years connects us. We may not know everything about them but we know enough and their life bleeds in torrents off the screen an into the theater.

I am staggered by the film and left kind of broken even weeks after seeing it. This isn’t a film but life project bigger than life for all to see.

I am floored by the film. I have no idea who to critique it any more than I can critique real life. To be certain I’d like to see more, to know more, but at the same time the film has to be manageable.

I have no idea what you will think of the film, I still don’t know fully what I think, but without a doubt one of the must sees of Tribeca.
Posted by Steve Kopian at April 27, 2019