Tracy Edwards, the subject of Maiden, at Tribeca 2019 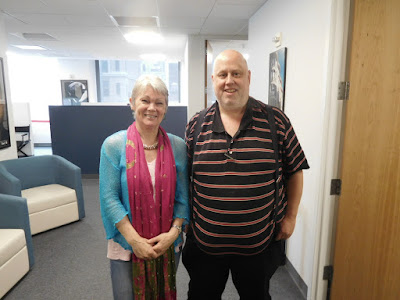 If you want to know what the highlight of this year's Tribeca for me is, it is the moment above, when I met Tracy Edwards in person.

For those who don't know Tracy is the woman who put the all female crew of the Maiden together and sailed around the world in the Whitbread Around  The World Race and thus changed the universe as we know it forever. The whole adventure is recounted in MAIDEN which I put on my best of 2018 list and which is premiering tonight at the Tribeca Film Festival.

When I saw the film for the first time I knew I had to meet her and when the film came to Sundance I began haunting the people connected to the film for an interview. When it was announced for Tribeca I started pestering again...and then they surprised me when out of the blue they contacted me and gave me the perfect slot for an interview.

The interview was one of the coolest things I've ever done, and I could have spoken to her for hours more (I only used a couple of questions).  It is clear why she could convince people to do "the impossible" because she is so utterly charming.

I will be running the interview in June when the film gets a theatrical release. Until then here is my review of the film and Nate Hood's review to give you a push to see the film at Tribeca.
Posted by Steve Kopian at May 01, 2019