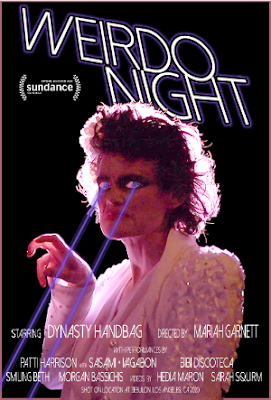 Weirdo Night is a cabaret style show performed before empty seats. It’s a mix of monologues, music and performance pieces  by people you would see in small clubs in New York City that cater to the offbeat tastes.

I'm going to kind of end this piece there. Its not that there is anything wrong with the show, though to be honest the pieces run from great to just okay, rather the problem is that I can’t really critique this.  Part of it is this is video of something that would play very differently if you were there and in the moment as opposed to seeing it recorded. The other problem is there is no way that I can honestly say how this will play for you.  If you are not open minded and very straight laced this is going to be torture while if you are open minded and like the envelope pushed you may love it.

The biggest problem for me is this is the pilot episode. One of the reasons I don’t as a rule look at pilot episodes of TV is they aren’t always a good indicator of how the series will be. I’ve signed on to a good number of pilots over the years only to find the series dies. I don’t do TV or streaming series since I want to see a run of the show before reviewing so  I know if I am being fair with what I say.

That said as a stand alone episode Weirdo night is a good little show. I would have been perfectly happy to see it live. I would also be very curious what later episodes will bring.

Is it worth seeing? If you miss the club scene or are adventurous it is.