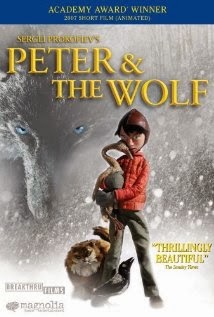 Updated retelling of Sergei Prokofiev's Peter and the Wolf is a masterpiece of stop motion animation. Set in modern Russia it pretty much follows the story of young Peter going out into world despite his Grandfathers warning and encountering a wolf.

What makes this film so special is that the film has so many small touches that add life and magic to the oft told tale. Look at all of the facial expressions. These are not inanimate objects these are real people and real characters. Look at all of the eyes how alive they seem. Director Suzie Templeton has added a much needed element, danger, to the proceedings. In all the years and all of the countless times I've heard the piece I never really feared for Peter or his friends, here at last I do. Its an edgy retelling that is more emotive since Peter is in very real danger of getting hurt or killed. There is an edge and a weight to the proceedings that I've never experienced before.

Its not fair to compare this to the Disney version since they are two very different takes on the same story. Both valid, both excellent, but not rightly compared.

Make an effort to see this film, it is a classic.