The Tribeca 2018 Curtain Raiser (including recommendations) 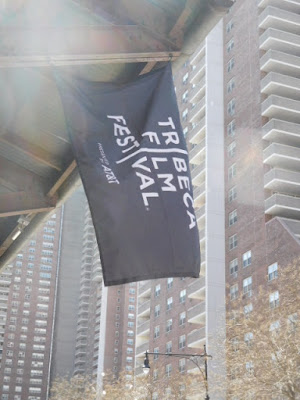 The Tribeca Film Festival begins Wednesday and with it comes an avalanche of cinematic goodness.

As this posts we’ll have seen over 50 films screening at the festival and we probably have another 50 to go- plus reports on talks, live events and interviews. There is so much coming that I turned into a puddle of person sometime last week and had to be carried around in paper cup for the last few days of the pre-festival screenings.

This year there are not a ton of films that automatically stand out as attention grabbers. That is not to suggest that the festival is bad this year, rather there are no films on the order of THE AVENGERS, which had a special pre-release screening a few years back. Most of the films that are garnering attention are the anniversary screenings-SCARFACE and SCHINDLER'S LIST and the opening night film LOVE, GILDA about Gilda Radner. The desire to see the Gilda Radner film within the press corps is such that I could sell me opening night tickets for a large profit. The fact that there are no big budget films doesn’t mean there aren’t films you should see because we have a rather long list of films below that you’ll want to score tickets to.

For me this year has been a mix of seeing films on subjects that interest me (Ryuichi Sakamoto, Blue Note Records and fashion) or catching up with the latest work by a filmmaker I admire. In the later category is Jon Kasbe, one of my most favorite filmmakers. Kasbe is also one of the greatest filmmakers working today, despite no one really knowing who he is. All of his films, such as MIPSO IN JAPAN, A BEAUTIFUL WASTE and HEARTBEATS OF FIJI are simply masterpieces. When I saw his WHEN LAMBS BECOME LIONS on the Tribeca list I shouted because he was finally going to get the attention he deserves and because Kabe let me see a bit of the film three years ago and I've wanted to see it ever since. While I have not seen the finished film, I am going to the World Premiere on Friday Night, word from the pre-festival screening was incredibly strong so I’m excited.

This year in addition to yours truly coverage will be coming by way of my usual Tribeca partner in crime Ariela Rubin who is going to be doing a bunch of reporting from the both the press and public trenches. I know JB is going to weigh in here and there, and he will have an special review of the Blue Note Record film. If you want to talk about Jazz you to talk to JB. A former jazz history teacher he is going to bring a wealth of information to the discussion – something I know since we had a long talk about the film after the pre-fest screening that made the film that much more special. I’ve also lassoed Chocko to wade into a few public screenings that I thought should be covered.

I know you really don’t care about this idle talk, what you really want know is what you should see. Below you’ll find a list of films that we think you should try to see. Because of embargoes I really can’t say more than I have below. Full reviews for pretty much everything has to run after the first screening so the list below is my only chance to point you toward things we really want to share with you before social media explodes after the first screenings and tickets become even more hard to come by.

One note - just because a film isn’t on the list below doesn’t mean we don’t think you shouldn’t see it- rather its most likely we haven’t seen it yet. The festival is running over 200 features, shorts, games, VR and 360 degree experiences, TV programs not to mention having talks and special events so there was no way to see it all even with an almost 4 week run up to the festival. We haven't even seen a quarter of what is running so my advice just buy tickets.

And now its time for me to finish up the final pre-fest reviews and relax because come Wednesday night and the screening of LOVE GILDA we will be going nonstop until April 29 when the festival ends.(reviews will run for a week after the fest ends)

For tickets and more information go to the Tribeca Film Festival Website.

Let me start by saying get tickets for the shorts collection HOME SWEET HOME since it has at least three of the best films (*) playing at Tribeca in it.

HOUSE TWO - One of the best and most important films of 2018 concerns the aftermath of a massacre in Iraq and the efforts of the Marine Corps to see that justice wasn't done. It will piss you off big time.

CARGO- even if this wasn't one of the best films at Tribeca, it would be recommended because the photography must be seen on a big screen before the film goes to Netflix. As it is it is a wonderful addition to the "zombie" genre with a conclusion that had people I know talking about the ending for days afterward.

WENDY'S SHABBAT*- a lovely small film about a group of seniors doing their best to keep tradition alive.

EARTHRISE*- the story of a photograph and the men who made it. One of the best films of 2018

THE MISEDUCATION OF CAMERON POST- Sundance fav about a young woman undergoing gay conversion is a surprisingly low key gem that makes it's point without over doing it with broadstroke villains.

NICO 1988 this fantasia on the final 3 years of the icon is going to be best if you know who Nico was. Regardless the towering central performance by Trine Dyrholm makes this a must see.

SLUT IN A GOOD WAY- surprisingly charming teen sex comedy is funny and is worth seeing for its sterling cast which carries the film over the bumps.

HOMELESS: THE SOUNDTRACK*- Wonderful film about a musician who finds her biological father living on the street and reconnects with them.

JELLYFISH - Buoyed by a towering performance by Liv Hill, this is frank look at one girl trying to get by in a life where everything is stacked against her.

SONG OF BACK AND NECK - wonderful off kilter drama/comedy/romance about a man with a bad back, It has some of the most glorious moments of any film this year.

ALL ABOUT NINA- very good film about a comedian whose personal is going off the rails who gets a look chance at success and love. Yea its funny but it also packs an emotional punch that will knock you back on your heels.

EVERYTHING IS STORIES is screening in the N.O.W. Showcase and is great. It is an episode of a new documentary series that was based on a successful podcast. In the episode screening at Tribeca we get a look at a funeral home who will take those who no one else will. This is great filmmmaking.

RYUICHI SAKAMOTO: CODA- a portrait of the composer that is an awesome exploration of creation.

BLUE NOTE RECORDS: BEYOND THE NOTES- excellent primer on the legendary record label and its unique way of making music- letting the artists do it their way.

TIME FOR ILHAN- Great political portrait of the first Somali woman to hold elected office in the US. It is one of the best films at Tribeca.

THE 716TH - awesome space action short that hopefully will lead to more.

Reviews for all of these - and more will follow starting Thursday.