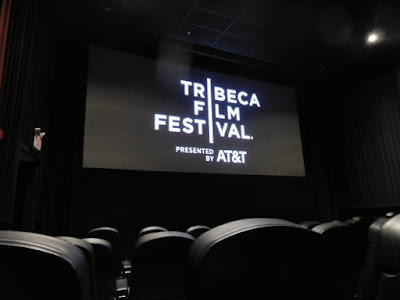 It was supposed to be a quick in and out day at the festival where I saw no one  but I ran into all sorts of friends, JB, Ariela, Hubert Matt, Mike Gingold, Liz Whittemore, Melissa Hanson, Oron (who made be laugh to the point I almost fell over) and a few others. Its talking to everyone that makes festival going so much damn fun.

I was introduced to one of my most favorite directors, Jon Kasbe and had to work hard not go completely fanboy on him. Hopefully soon I will get to talk to him about his wonderful WHEN LAMBS BECOME LIONS and all his other amazing films.

I was also introduced to Gabrielle Brady the director of ISLAND OF HUNGRY GHOSTS and Po Lin who is the subject of it. They both were a complete joy to speak to. Also after talking to Ms Brady I'm going to have a hard time writing a review that will match the words that flowed from my me in expressing my feeling for her film.

Thank you Susan Norget for the introductions to both directors.

After the movie today I snapped a couple of pictures on the Red Carpet for EGG. They'll be coming (As will the ones I took from the IN A RELATIONSHIP Red carpet yesterday)

SATAN AND ADAM- perhaps my favorite film of the festival. A super doc about the blues and a decades long friendship that changed two men.

7 STAGES TO ACHIEVE ETERNAL BLISS BY PASSING THROUGH THE GATEWAY CHOSEN BY THE HOLY STORSH - I hated this film. Not really funny comedy that tries way too hard. It would have been great if they had only played it straight

BETHANY HAMILTON UNSTOPPABLE- Great looking and sounding surfing bio needs to be seen big and loud. The sound and image make the film greater than it would be otherwise.

Reviews will be coming of all of the films.

Now to rest and write up everything from the last two days.
Email Post
Labels: tribeca 2018