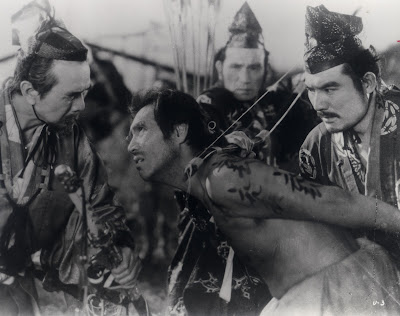 With UGETSU playing at the Japan Society and MOMA as part of Kazuo Miyagawa: Japan’s Greatest Cinematographer I am reposting the review I ran to tie into a screening at the New York Film Festival

Having haunted those outside of Japan for the last 63 years UGETSU MONOGATARI was part of the double whammy, alone with RASHOMON that made people sit up and take notice of Japanese film. Its a film that has been admired by and influenced filmmakers such as Martin Scorsese and Roger Ebert.

It's impossible to simply explain the plot but it concerns two couples and their fate during time of war. One, a potter and his wife, is warned not to profit from the conflict. The other man foolishly wants to join the battle and become a samurai. Tragedy and ghosts follow

If you've never seen the film you should. Partly because it is considered a classic of world cinema (though apparently in Japan public domain copies are traded like so many 1940's horror films here in the US) . Mostly you want to see it because the film is a kick in the butt. Sure its mannered and bit formal, but it still packs a wallop even if you've seen it multiple times.

I've seen the film several times over the years and I've always loved the moody black and white photography. I'm not sure how much the love comes from the film itself , or how much is from some very worn prints I've had to see over the years. (say what you will there is something about dark black and white prints of horror films that adds to them.) Of course when you see the film at the New York Film Festival (and you should) you'll be seeing a pristine restoration. You'll also be seeing it on a big screen under optimal conditions which means your mind will be blown.

UGETSU is screening as part of Kazuo Miyagawa: Japan’s Greatest Cinematographer which is being co-presented by The Japan Society and The Museum of Modern Art. Click on the links in names of each location for show times, tickets and more information
Posted by Steve Kopian at April 13, 2018