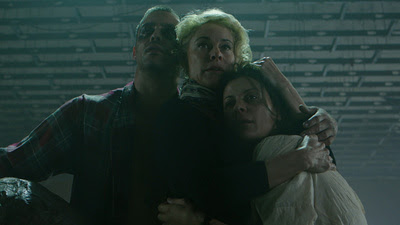 An actress is hired by a respected, but crazy, theater director to star in a play which is performed after being awake for 108 hours. The idea is that it will open doors to other realms and give a truer performance. Actually it opens the door to restless spirits, which is  bad idea since the performance is taking place in an old insane asylum.

A truly bent look at reality, YOU SHALL NOT SLEEP split the audience I saw it with. Half loved its broken reality where nothing makes sense because you're too tired to piece it together. The other half, myself included, loved sequences and moments in the film, but disliked the fact that it makes no f-ing sense what so ever. Seriously nothing does. I suspect that I might have bought into it had the film not used the notion of staying awake being for a play. It makes no sense on the face of it, and even less sense in the world of the film.  The idea, like many others in the film, just hangs there.

However, despite the lack of sense and internal reasoning the film carries us along from start to finish. We are compelled to watch because it is bat shit crazy, but we are never scared. The lack of terror is because of the lack of logic, with the result other than a couple of jump scares the film never is really frightening.

Despite the lack of scares or reason, I still think the film is worth a look for horror fans, simply because  the film has some truly great moments.

For tickets and more information go here.
Posted by Steve Kopian at April 20, 2018