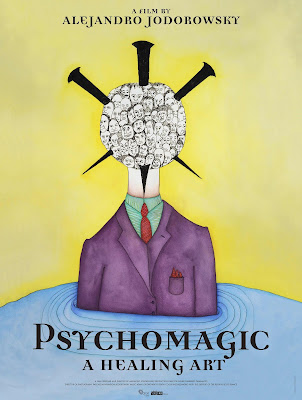 I am going to be completely honest right up front and say I have no idea what to think of the latest film from Alejandro Jodorowsky. The film is a documentary on his psychomagic which he uses to heal people of their traumas so they can go on and lead healthy lives. It is a film where Jodorowsky talks about his process, which comes out of the theater, and which he has been refining for the last half century. The film is essentially an illustrated lecture by the director explains what he is doing and then showing us examples.

This film is kind of impossible to review. It is somewhere beyond a conventional film, it is not even a conventional documentary, running closer to a position paper on Jodorowsky's ideas. There is nothing counter to them, simply a discussion with illustrations. It isn't a movie, so much as an infomercial, except that there is no website or phone number to call in the next ten minutes.

As a writer on film I really don't know what I am supposed to do with this film. I cant really critique it as a piece of cinema because it isn't really a film as such. The film is simply one man and his followers talking about their process for healing themselves and others with examples. Does it work? I honestly don't know.

I do know that I find listening to Jodorowsky talk is interesting. I intellectually like the ideas he is putting forth. I have no ability to know if he is right, or would be right for everyone. I do know some of the demonstration sequences are almost embarrassingly intimate. Several times I felt like I was intruding. I also found several pieces a bit silly.

I have no idea who this is aimed at. As a long term Jodorowsky fan I was interested in his showing how his magic informs his films, but at the same time this really isn't a film I would watch a again, which is not something I would ever say about any of his other films.  To be frank I think this is going to confuse the hell out of a lot of people- I know it confused me.

I suspect that unless you are either extremely interested in mental health and emotional care or are the sort of Jodorowsky fan who wants to really know where his ideas come from  this is not going to be for you.

For me, I came I saw I'm going to go watch Magic Mountain again.
Posted by Steve Kopian at August 07, 2020