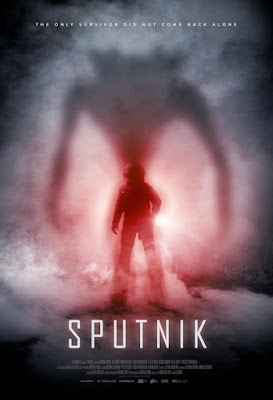 Originally slated to world premiere at the Tribeca Film Festival SPUTNIK but with Covid wrecking the best laid plans it ended up opening in Russia and elsewhere in the world before it hits the US on Friday.  I'm cool with that simply because this sweet little scifi/horror film can now be seen by everyone.

The plot of the film is simple: in 1983 two cosmonauts are returning from space when something happens. One of them is dead and the other has an alien life form inside him which comes out when he sleeps. The Soviet officials need to figure out what the hell is going on so they grab a brilliant but troublesome doctor and spirit her away to their secret facility. Perhaps she can sort it all out....

What happens after that is the film and it's a really simple and incredibly tense little film. When I say the film is simple, I just mean that there are no big plot twists and turns, it is pretty much a straight forward telling of the story. There are no plot gotchas, its all right there before us and any twists beyond the stuff with the creature and its host are things we could have sussed out on our own. In away this is closer to the classic B science fiction films of the 1950's through the 70's instead of the more modern overly thought out films of recent years and we are better for it.

There is this moment early on where our heroine is sitting on the military chopper and asks when she will have to sign the paper that she can never talk about what she is about to see. It's this wicked little self referencial moment that lets you know that the filmmakers are aware of the games, and by having her aware of it it wipes away the need for complexity. That shifts things toward simplicity since it makes us think "oh this will be complex" and then director Egor Abramenko plays us by keeping it all front and center. This approach keeps us in the moment because we aren't trying to see the twist, we are just watching things unfold. It's brilliant and gives the film emotional resonances of a straight forward story that a twisty turny film never would have had.

It also allows the cast, and the creature, to take center stage. Because the plot isn't complicated the characters can shine. Oksana Akinshina, Fedor Bondarchuk, and Pyotr Fyodorov are all at the top of their game. They pull us in and make us care about what happens to them. I love that they don't use blacks and whites but give us a colorful palette to play with giving us more to think about than is someone is good or bad.

And the acting extends to the creature. It a creepy and icky thing but there is emotion in what it is doing.  There is a complexity to its reaction which makes us realize that as terrifying as it is there is something more going on than typical monster stuff.

To be certain the film isn't perfect, it's probably 20 minutes too long, but at the same time its creepy and scary and unexpectedly moving.

Highly recommended to anyone who wants a wonderful but atypical modern science fiction horror film.