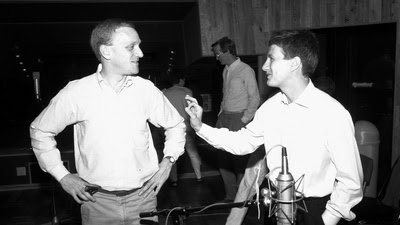 This is the review we ran at last years Tribeca where it wowed everyone. Below is the Q&A that followed the World Premiere

Loving and deeply deeply moving portrait of Howard Ashman who  along with Alan Menken wrote the musical LITTLE SHOP OF HORRORS went on to help revitalize Disney animation in films such as ALADDIN, THE LITTLE MERMAID and BEAUTY AND THE BEAST.

Telling the story of Ashman's life from childhood to his death. The film pretty much covers it all making up shows for his little sister on through college, his starting his own theater company, the meeting with Menken, Broadway and eventually Disney. It is not only a portrait of the man but a very clear explanation a to why and how he changed popular culture forever.

This is a film that literally brought tears to many of the critics covering the Tribeca film festival. sitting in a crowded theater I could hear the sniffling and nose blowing around me during the more poignant moments. i'm not ashamed to say I cried at times, and amazingly I had several normally stoic critics admit to me that, yes they cried too. Apparently there is now a small secret society of people who cried during HOWARD. Having worked on some of our favorite films,Ashman's  work meant the world o us and his loss means something.

This is a great film and I can't believe that the film hasn't been snapped up by Disney because it is so good on so many levels.