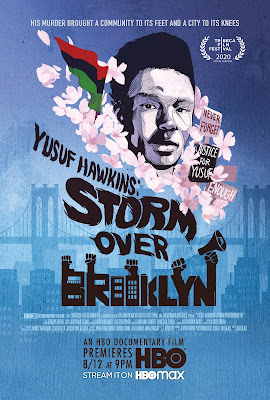 Thirty years on HBO looks back at the Yusuf Hawkins killing which rocked New York City and the country.

On August 23rd 1989 young Yusuf Hawkins and three friends left their East New York Neighborhood and went into the Bensonhurst section of Brooklyn in order to see about buying a used car that was for sale. Unfortunately they ended up in the wrong part of town and they were set upon by a gang of white men who were looking to beat up an unknown black man who was dating a white girl. All of the young men were beaten up and Hawkins was shot twice in the chest and died. The city exploded. Bensonhurst closed ranks and wouldn’t give up the shooter. The black community then began to march for justice and eventually those responsible for the attacks were turned over to the police and the racist underbelly of the city was exposed.

This excellent documentary is a beautifully made trip back in time. Watching the film I could feel myself being transported back 31 years to when this all went down. I remember seeing much of the footage that makes up the film. This is going to be a needed refresher for anyone who doesn’t know who Hawkins was or doesn’t really remember what happened and why his death rattled so many cages. What I love about the film is that without really trying the film connects up today’s events back to the Hawkins murder and we see little has really changed.