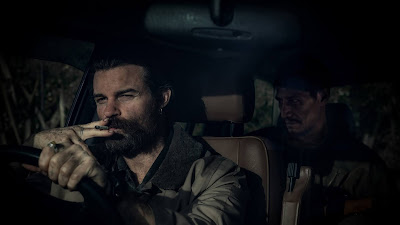 A family goes on a  trip into the wilds of New Zealand. There they are met by to men who have evil in their hearts.

Bleak, black, kind of hopeless hate machine is a thrilling ride that works for much of it's running time until a couple of turns makes you realize that the film exists purely to show off the considerable skill of director James Ashcroft and that there is nothing really behind it except skill and delight in showing cruelty and proving he's capable of playing with the big guys.

Don't get me wrong this is a good film on it's own terms, but at a certain point, the film stops making narrative sense.  If you need the point I lost it it was the stop at the gas station where suddenly the turns really felt like Ashcroft was just being ugly to be ugly. While life can be like that, the long string of events before and after that made it clear that it wasn't necessary other than to be a florish. (And yes I'm being vague because I d0n't want to ruin it for you since its worth a look if you like this sort of thing)

This was also the point where I realized that there really isn't anything special here. We've been here before any number of times. The hows and whys eventually fell off the table as I started to realize that the whole scheme makes very little sense, at least as told here.

If you want to see a potential new force in cinema  or like cinematic cruelty give it a shot.