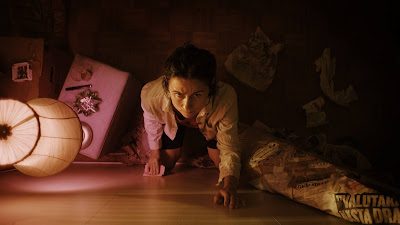 Cecilia Milocco gives a performance for the ages  in KNOCKING which just premiered at Sundance.
Milocco plays a Molly, a young woman trying to recover from the death of her lover.  Recently released from a mental hospital and having a tenuous grasp on reality, she moves into a new apartment and begins to try to put the pieces together. Then she begins to hear knocking on the ceiling above her and things begin to spiral out of control.
The film is all Milocco who is on screen pretty much the entire time. She is on or face the entire time and we watch as she slowly comes apart before us. It's an Oscar worthy performance that will, unfortunately probably, get overlooked come the next Oscar season because it is hitting too early in the year. In all honesty this is a performance people should study on how to say more with less.
Outside of Milocco's performance I'm not certain the film is much of anything. Part of the problem is that we have been here before. There have been other similar films over the years so there isn't a lot knew here. There is also the problem that outside of Milocco's staggering performance there isn't much here. The film is so focused on watching her break apart this film is less a thriller and more character study of a woman in free fall. It's so focused on Milocco that when the denouncement comes it seems like an after thought (frankly I could have done without it)
Is knocking worth seeing?
For the Milocco's performance or a character study of a broken woman it is, but for anyone looking for just a thriller, you may want to look elsewhere.
Posted by Steve Kopian at February 01, 2021