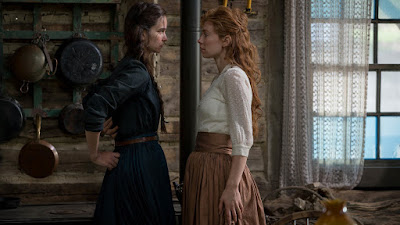 THE WORLD TO COME is going to split audiences. Either you are going to fall in love with its measured "inde" feel of gorgeous cinematography, lowkey performances, and meaningful narration or you're going to fall asleep and giggle at it's pretentions.

The film is the story of two couples living in the wilderness in 1856. Abigail is married to Dyer. Her world goes upside down after their daughter passes away. A short time later Abigail meets Tally, her red haired neighbor. She is married to Finney. The women quickly realize that what is between them is more than friendship.

With its mostly great  to look at, low key to the point of being underground style, and a whispered literary narration that wants to impart deep meaning, the film feels exactly a stereotypical inde film. This is a film that is going to be manna for many. It was designed and put together exactly for a specific audience.

Sadly I'm not one one of those.

While I can appreciate the actor's craft of this film it ultimately left me cold.

Part of the problem is the glacial pacing. While I appreciate that it mirrors the pacing of life on the frontier, how it plays out for much of the running time is too measured. I drifted off.

The other problem with the film, for me, is the almost non-stop breathy narration. While I would love to listen to the narration as a book on tape, in the context of the film the narration works against the film. Why?  Because it largely removes the need for the images. Why are we watching the film when the narration tells us everything. Okay not everything, but damn near everything. So much is revealed in the narration that it effectively tells us how to feel and what to think. I thought movies were supposed to show not tell.

Forgive me I don't watch films to have my thoughts and feeling of what I'm seeing given to me, I would rather engage with film then be hit over the head by it.

Watching the film I couldn't not think of Portrait of a Lady on Fire from last year. Both films cover similar grounds, however Portrait is a much better and infinitely less pretentious film- and one that I would gladly watch again