Running with the Devil: The Wild World of John McAfee (2022) 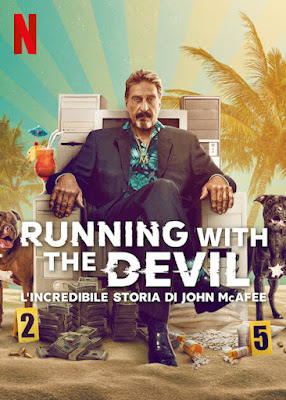 Good but not what you think it is look at tech tycoon John Mcafee, founder of the anti-virus software, as he tries to flee authorities in Belize who want him for the murder of his neighbor. The whole thing is chronicled by several writers for Vice who ride along with him and his insanity. The film also chronicles Mcafee’s interaction with a potential ghost writer.

This is  a crazy film. It’s a chronicle of the wild ride of the filmmakers and a writer who fell into Mcafee’s orbit as he traveled the world trying to avoid authorities who wanted him. He said he was being set up because he had the goods on everyone since he had spying software installed on computers raging from World governments including the American,  to drug cartels  toregular people. He said he had the goods on everyone and those in power wanted what he knew and were trying to set him up and hunt him. I have no idea how much of what he says is true, but it’s clear Mcaffee believes it, as do the people in tow. It’s a crazy chase across continents that doesn’t always make sense, but then neither does Mcafee.

While I enjoyed the crazy two hour ride I’m not sure what the point of the film is. Focusing wholly on the weird game of cat and mouse we don’t really get any sense of who the man at the center of it all. He’s a rich crazy tech guy and that’s it. We get no sense of anything before that (so don’t come into the film looking for a whole life biography) so we don’t know why all this matters. The result is a good looking shaggy dog story.

Honestly I like the film, but it’s a minor nothing. Sure it will help future biographers to get a look into the crazy period highlighted but anyone else is going to be disappointed if they want more than a recounting of a crazy story.

Is it worth seeing? Yes, just don’t expect it to go as you think.