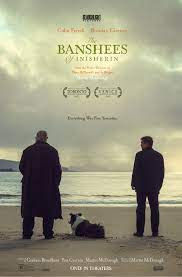 Martin McDonagh’s story of the end of a friendship is yet another trip to his world of cruelty. The basic story has two long time friends on the outs when one of them decides that he doesn’t want to be friends any more and to seal the deal he says that he will cut off his fingers if they ever speak to each other.

Why does all of this happen?

Beats the shit out of me.

Then again I have been asking that question about McDonagh’s work for decades. While there is no doubt he is  one of the best writers of the last 50 years he has a serious problem with plotting, specifically everything he does hinges on this dark turns that happen no really good reason other than McDonagh deems it so and has to have his characters screwed over in the end.

Going back to his early plays McDonagh has always enthralled me with his various tales of human darkness, but he almost always ends up pissing me off with his weird ass turns into cruelty that seems out of left field. More times than not (Pillowman and the Cripple of Inishman being the exceptions) the stories hinge on a twist  or set up that makes zero sense.  Clearly McDonagh thinks humans are fools deserving to be crushed, and I could except it if his stories didn’t almost always leave me feeling that the he only knows how to end his work by fucking everyone over (don't get me started about The Hangman). He is the best example of the artist who feels he can only be taken seriously if there is tragedy in the third act…even if that means cooking the books to do so. He always seems to be saying "People have to die/be broken even if I have to invent an out of left field turn to do so."

BANSHEES begins with a turn that’s believable until with get to the whole finger thing and then it just goes off the cliff. None of it really makes sense. Yes it’s well done, but I was never buying the bullshit.

Frankly outside of the acting and technical aspects this is a kind of stupid tale.