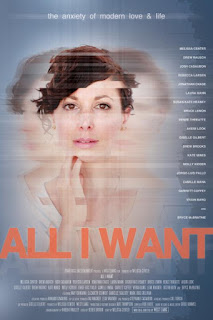 You've heard this one before but don't stop me- a bunch of friends get together for a party, in this case the 10th anniversary of one of their own and laughter is had, tears are shed and food is eaten as secrets are revealed.

ALL I WANT is on the face of it the sort of thing that you've seen any number of times before. It's on the face of it absolutely nothing special... on the other hand the cast lifts the film up and makes this a film you'll want to take the time to see. Their chemistry makes this something more than the usual riff on the Big Chill. As always it is the cast makes something old gloriously new again.

ALL I WANT is a good enough variation on a theme that I'm not going to try and cobble together a review that doesn't do the film justice. Actually I did try to put something together but in the crush of festival coverage I can't make it sound the way I want it to. To that end I'm going to let this piece sit here and I'm going to simply say that ALL I WANT is worth you time and money and that you really should make an effort to see it when it opens Friday in theaters.

To put it another way ALL I WANT is exactly the sort of film that I started Unseen Films to highlight and put on to your radar. Go see it.
Posted by Steve Kopian at April 11, 2018