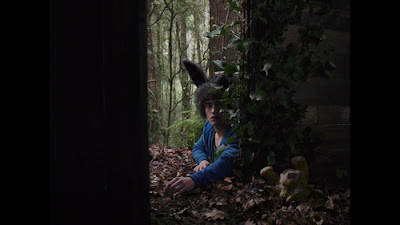 Love it or loath it over long short has a teenager who always wears a helmet with bunny ears punishing his mother's lover.

Actually I suspect this might have worked better had the lead not had the ridiculous bunny ears on though the whole film. Early on I just lost any respect for the film when the ears stayed on no matter what was happening.

Clearly I'm the wrong audience for this film, which is the usual feeling I get watching most films at New Directors New Films which more often than not seemed to be programmed for a very specific audience of which I am not part of.

If you're curious the film plays in Shorts Block 2 with the much better MOBIUS
Posted by Steve Kopian at April 01, 2018