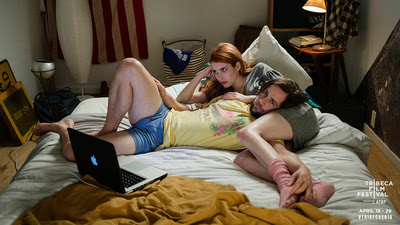 This is the story of two couples - Owen and Hallie who may or may not be on the road to break up, and Matt and Willa who are falling in love and having an unexpected romance.

Light as a feather romantic drama  is so light that in the time between I saw the film and sitting down to write about it it completely evaporated. It's not that I wasn't entertained, but more there isn't anything really special here. As someone who sees more than the legally allowable number of inde films each year this plays very similar to any number of other ones. We've been here before, though maybe not dressed up in the garb of the current millennial clothing.

Part of the reason I'm not particularly high on the film is that of the two couples the lead couple of Owen and Hallie are the least interesting. While they are positioned as the "main" story the more interesting couple is Matt and Willa who get less screen time. Matt is a nerdy kind of guy who is sweet and enthusiastic while Willa, Hallie's cousin, is supposed to be a man-eater and above it all. They are a pairing that isn't supposed to work but somehow surprisingly they do.  For me the best stuff was in their story because it wasn't the typical romance story because they aren't the typical romantic leads. Had the film focused on Matt ans Willa this film would have been something to rite home about.

Great looking and wonderfully acted  by everyone IN A RELATIONSHIP is worth a look but it isn't anything you need rush out to see.

For more information and tickets to the Tribeca screenings go here.
Posted by Steve Kopian at April 20, 2018