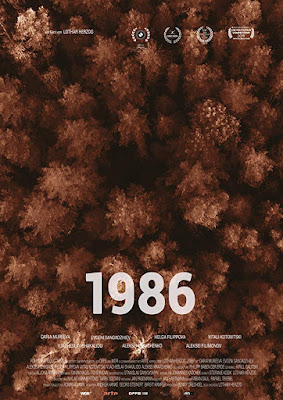 After her father is arrested, a young woman takes over his business f running into and out of the exclusion zone around the Chernobyl nuclear plant. This seems to mirror a disintegration in her personal life.

Director Lothar Herzog has made a film that sneaks up on you and jumps you from behind. As I write this several days have passed and I find that while I have seen perhaps a dozen other films that are playing Slamdance, Herzog's film is the one that I am still thinking of. It is a film of quiet power that haunts your psyche.

I think a large part of why the film works is actress Daria Mureeva as Elena. She pulls us close from the opening sequence where she is simply talking to her boyfriend straight on to the end. We can feel every emotion in every sequence, we sense what she is thinking even in the quiets moment and she makes us a co-conspirator. It is a powerful performance that hopefully will get her bigger roles.

It also helps a great deal that director Herzog masterfully moves Ms Mureeva through the story. While I could talk about a great many things that he does wonderfully I would like to simply focus on how he uses the landscape as a character. Watch as in the sequences in the cities the camera is in close, Mureeva is a large presence, and contrast it to how as she goes into the exclusion zone she becomes smaller and smaller. Her life and circumstance are devouring her- until in the end she completely disappears.

I am in awe of the skill of the filmmakers and the actors.

I should warn you that on the face of it 1986 is a small film. However while it is not big and flashy  it is a film that packs serious punch. It is a film that haunts you and gets under you skin.  It is a quiet masterpiece.
Posted by Steve Kopian at January 26, 2020