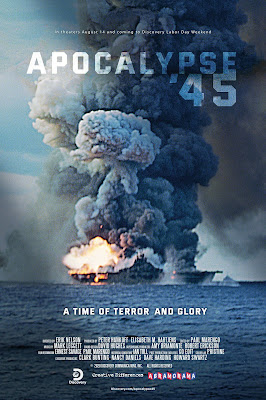 I went into Apocalypse 45 figuring that it was going to be a typical Discovery/History Channel doc full of lots of talking heads and a mix of old and new footage. I was truly shocked when what I got was a wall to wall film full of footage I had never run across before which was supplemented by the recollections of the soldiers who survived the final months of the Second World War in the Pacific.

This is not your typical war documentary. Where most films focus on events this film is more focused on what it was like to be the thick of things as well as the cost both psychic and physical of all of the destruction. This is not a rah rah film, there is a constant stream of broken cities, equipment and bodies – there are lots and lots of burnt, bloodied and broken bodies. If there was ever a film that ran counter to the propaganda BS spewed either during the war to keep morale up or after to reassure the population that what they did was right this film is it. This is a haunting experience which reminds you every couple of minutes exactly what the cost in lives was (hundreds of thousands of civilians not to mention the soldiers)

I can’t recommend this film enough. And while I know the film is going to be on Discovery  Labor Day weekend I highly suggest that if you can catch this in one of the big screen showings in the next two weeks you do so because not being able to look away will add additional power.
Posted by Steve Kopian at August 12, 2020