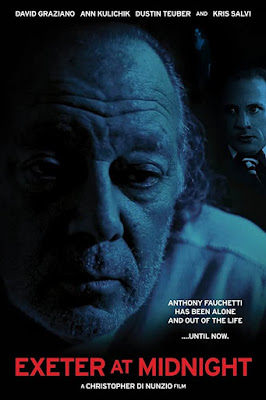 Christopher Di Nunzio returns with a film about an aging hitman who is "retired" and is starting losing his grip on reality who is forced to come back to the life.

This is a really good little film. A small mafia tinged tale about growing older and being beaten by life. The reason the film works so well is  David Graziano is masterful as Anthony our aging gunman. World weary and uncertain of anything, we can feel the pain  and sadness bleeding off him. We understand the things that are haunting him. It's an award caliber performance. Actually Graziano is so good that I would love to see this turned into a feature where we could get more into Anthony's head.

Heading out on to the festival circuit EXETER AT MIDNIGHT is a film you should keep an eye out for. It's a small jeweled bullet fragment of a film that is worth your time.
Posted by Steve Kopian at August 12, 2020