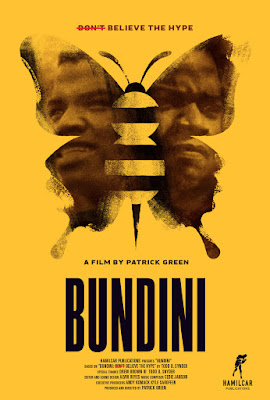 Patrick Green’s short bio BUNDINI was made to tie into the new book Bundini: Don’t Believe The Hype by Todd D Snyder about Drew Bundini Brown. The film  is so good that not only will you want to run out to buy the book you’ll want to track down director Green and plead with him to expand the film into a feature.

If you want to know who Drew "Bundini" Brown  just know that he was the man who coined the phrase "float like a butterfly and sting like a bee." He was a man who could motivate anyone to do the best they were capable of. He was introduced to Muhammad Ali by Sugar Ray Robinson as the only man who could out talk Ali. Bundini became a fixture in the corner of Ali as a trainer and living embodiment of will. On more than one occasion he he talked Ali into continuing a fight when he wanted to quit. . Bundini pushed Ali to be all he could be and when he passed away Ali said that Bundini was the man who made him The Greatest. (Green's film makes it clear that was the case)

Green’s film is a stunner. Giving the man his due the film finally puts the spotlight on a man who helped shape the Muhammad Ali we saw on TV and in the ring.  By making Ali all he could be he effectively changed the world. It reveals the life of the man from birth to death and makes you realize what an amazing  and influential life he lead. Is there anyone he didn't know at one time? Maybe not.

The only problem I have with the film is that there simply is too much to Bundini’s story to leave it at just over 20 minutes.This needs to be turned into a feature documentary. I understand that some may say hand the film over to Hollywood, but Hollywood would chop Bundini's life down to just his time with Ali, but his life was more than that, with a stint in the military at 13, love affairs with legendary singers, rubbing elbows with celebrities, making movies and plus his time by in the corner of two world champions there is too much for any one narrative feature to contain.

In all seriousness I really want a feature expansion of this film. I want to see the whole story. Mostly I want to hear more from all the voices that Green has marshalled to talk about Bundini. Mixing various contemporary interviews with new interviews with members of Bundini's family, people who knew him, as well as writer Todd Snyder Green gives us a well rounded portrait of one of the great unsung people of the last half century. Best of all the mix of voices, speaking with love, drive the film forward and makes you want to lean in close and hear all the stories.

Whether you like boxing or not.BUNDINI is a great film.  Its the story of a great man who did great things and and probably didn't get the attention he should have.

Certain to be on my best of the year list the film is very recommended.