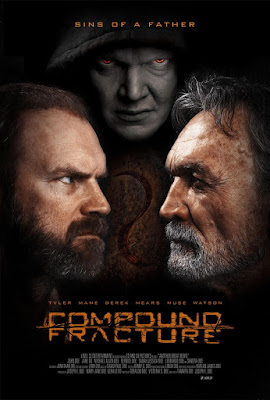 Tyler Mane plays a man returning to his family home with his fiance and nephew in order to help take care of his father. Mane had left years before because of the tension in the family unit. Things begin to heat up again not long after thy arrive, but then thins take a darker turn as it is revealed that something is trying to get into the house and kill the family.

Surprisingly good horror film is nice character driven film. This is a film where the people on screen matter and not the blood and guts. What a wonderful change of pace from the vast majority of  modern horror films.  Even better is the fact that the cast Tyler Mane,Derek Mears, Muse Watson, Renae Geerlings, and Leslie Easterbrook  not only capable of selling the material, but that they decide to do so.  They make it clear why this film has been kicking around for the better part of a decade and is now getting a VOD release.

If you want a good character driven horror film COMPOUND FRACTURE fits the bill.
Posted by Steve Kopian at August 08, 2020