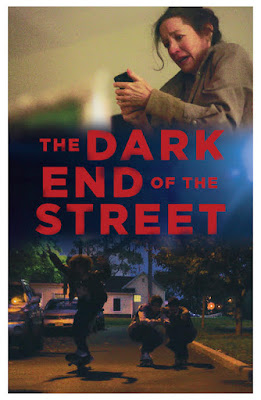 Hitting VOD Tuesday is a small micro-budgeted gem that you really need to take a look at. Despite running a brief 70 minutes THE DARK END OF THE STREET packs a visceral punch larger than most films  coming out of Hollywood or the inde scene.

Set on one night in a small community the film focuses on the various interactions between residents many of whom are on edge since the police have revealed that someone seems to be breaking into their home and killing their pets. While that is the catalyst, of sorts, the real stories or stories revolve around life just happening and people talking about their lives.

Moving like the wind and possessing great insight Kevin Tran has fashioned a film for our time. Despite the film not being set in these Covid swampd times the films thematic thrust of people trying to find a human connection is more relevant today than when the film was made. We are all looking for sense of belonging to something greater. The question as to whether Tran's character's find what they are looking for is something you are going to have to watch the movie  to discover.

I really liked this film. Frankly I didn't really want to see the film because it didn't hit all the ticky boxes but I agreed to look at the film simply because of who offered it to me. His recommendations always tend to be worth the time even if I don't like the film itself. This time it as dead on and as a result I found a small gem I can recommend without reservation. It is exactly the sort of film that I started Unseen FIlms to highlight.

Hitting VOD on Tuesday I suggest you give THE DARK END OF THE STREET a shot. Its a beautifully acted ensemble piece with something to say and make you think.
Posted by Steve Kopian at August 09, 2020