Anything for Jackson (2020) NightStream 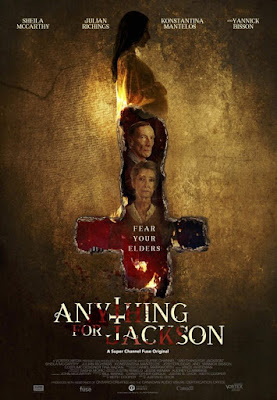 Anything for Jackson is an absolute blast. A wonderful horror film with comedic elements the film will chill you even as it makes you laugh.

The film follows an older couple who want to bring back their young grandson who was killed in a car wreck. In order to do that they need to put the spirit into the body of an unborn child. Their efforts go wrong and things become terrifyingly (and occasionally humorously) wrong.

One of the great horror films of the year this film just takes everything up to 11. Going in delightfully unexpected places and not shying away from showing us things that make us go “what the hell was that?’ out loud, the film is intent on smashing down the walls between normal and f-ed up. Completely out there scenes collide with the always great Julian Richings going through his day. At other times balls to the wall horror will lead into humorous scenes like a meeting of Satanists where they insist on the snacks are for after the meeting.

I had loved every god damn minute of this film, especially the ones that made me feel uneasy.