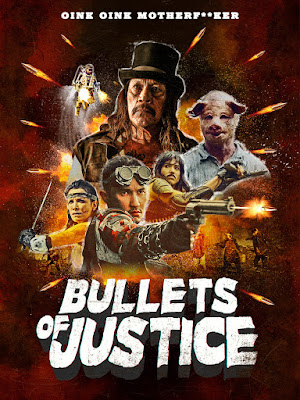 I have no idea what to think of BULLETS OF JUSTICE an out there (no, even further out there) film about a world where pig/human hybrids have taken over the world and now farm people. Mixing wild action, a bent world view, some seeming hardcore sex and WTF plot the film is unlike anything you've run across.
I love the action, I love the look, the script needs work because things seem to just jump to the next thing.
Not making a hell of a lot sense and swing from pillar to post, BULLETS holds your attention because it is just so weird. Things just seem to happen because they can. Characters come and go and its all punctuated with some crazy ass action sequences that deserve to be in a more coherent film. I marveled at the action every damn time.
While I'm not a prude I'm not sure that the graphic quality of some of this is really needed. Do we need multiple shots of the pig men soiling themselves? Do we need the sex scenes (forget that some of the shots suggest its not simulated), they really don't serve a purpose except to bring in a certain audience.
Reservations aside this is a film that is a cult film in the making. There is enough weirdness and off the beaten trail appeal that I have n doubt that this film is going to gain a following now that it is out on home video. This is the the sort of weird cinematic confection Unseen FIlms was set up to highlight.
Recommended for anyone who wants something completely out of the cinematic mainstream
Posted by Steve Kopian at October 21, 2020