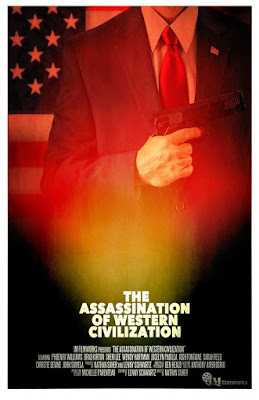 In the aftermath of the assassination of a senator Mark,a journalist, finds himself under scrutiny by the FBI and others.

If you are willing to go along with this single take  thriller you will find yourself rewarded by having yourself caught up in an intriguing mystery as people come to call and our hero has to try and dig himself out of a hole.

The key to really enjoying this film is to understand that much of the first 15 minutes of the film is set up. People come into the room and talk to or at Mark, who says very little. It is only as some FBI agents come in that things heat up. (Actually they heat up just before that but I can't tell you why). From that point on the film becomes a cat and mouse game all the way to the end.

I likes ASSASSINATION OF WESTERN CIVILIZATION a great deal. It was a nice change of pace from all the big and loud thrillers we are seeing these days and it is so nice to simply see a film where the characters carry the film.

While I could quibble with the one take nature of the film (I think it highlights the fact this was a stage play too much), the film kept me watching once it's all set in motion. Once the drama really kicks in you really won't notice that there are no cuts.

Worth a look for anyone tired of your typical Hollywood thrillers