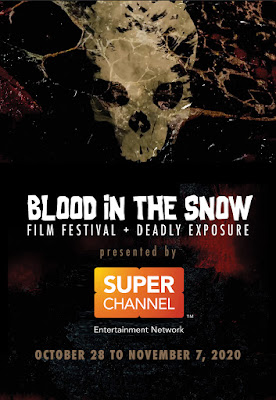 The best thing I can say about Blood in the Snow is that this is the festival you go to to see all the films that will be playing all the other festivals next year or the films that everyone will be talking about very soon.

Blood in the Snow  (BITS) is a great festival. I have been covering the fest for the past five years and it’s an absolute delight. The films are great  and the people who run  it are even greater.  And make no mistake that last part is key.  Going  to fest if the people running it are unfriendly kills the whole experience.  However if you go to a fest an the staff is great and the crowds are friendly, it really doesn’t matter how good or bad the film screening is because you are just going to end up having a great time.

Sadly this year BITS is going virtual so there will be no hanging out with everyone. On the plus side the fest being virtual means everyone can attend. This year the fest is going to be found on the SUPER CHANNEL (who clearly know a winner when they see it) and you can buy passes for the films here. (Actually all the information on how to screen the films is there)

This is a fest that I love so much I try to see everything they program. And true to that feeling,  I’ve seen all everything except one short and two bits from the web which were not offered to the press. Having seen essentially the entire fest I can say it is once again outstanding. While there is a film or two I wasn’t thrilled with, it is purely because in a high quality fest like BITS some films are bound to be better than others in comparison. If I saw them away from the bounty of the fest I know I would have liked them more. I ask that you keep that in mind as you read my critical reviews.

I started reviewing the short films earlier today (that piece is here) . I am going be reviewing all the short films in the days before the festival starts. I want you to know all of the collections are worth your time (as are the shorts playing with the features). A word of warning my reviews are grouped randomly and not by section because that is how I watched them (I find I respond better to the films that way). There are some real winners here (and some truly f-ed up films as well) so I highly recommend you watch all of them. As much as I will upset some directors by saying this, the shorts as a group, are probably more satisfying than the features (and the features are really good). DO yourself and see the shorts. (And  because I love his films I have to give a friendly shout out to Justin McConnell’s SOUL CONTACT which is in the comedy group and is amazing- A review is coming)

Because I have no life I have previously reviewed some of the films previously. They can be found here:

It’s all good so check out the selections and get access to a bunch of things.

(Once more all the information you need is here)

Email ThisBlogThis!Share to TwitterShare to FacebookShare to Pinterest
Labels: The Blood in the Snow Canadian Film Festival 2020