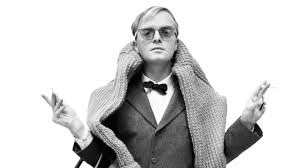 This is an excellent look at Truman Capote that uses interviews done by George Plympton for his bio of the writer as the spine as a means of getting to the heart of the man and his world. It's a film which brings us deep into the life and times of a man who was unlike anyone else.

I've always been fascinated by Truman Capote. Growing up he was this crazy man who was on all of the tal shows. He was witty and charming and entertaining as hell and he utterly charmed me. Whenever I saw him on TV I would stop just to see what crazy thing he was going to say.  The ability to get to hear all his friends and acquaintances talk to him was something I had to see.

Ebs Burnough has made a masterpiece of a film. This is a stunning look at a man that not only shows us the life of the man but also the various sides of the man himself.  We see his good side and bad side and it's fascinating. Additionally, and probably more importantly, Burnough gives us a look at the world where Capote existed. By doing this he gives us a greater insight to the man and the world at large.