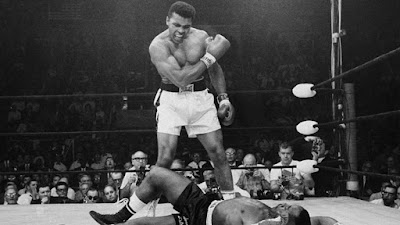 William Klein's portrait of Muhammad Ali is a mixed bag.

Looking at the circus around his fights with Sonny Liston before jumping to The Rumble in the Jungle almost a decade later.  The film seeks to put it all into some kind  of context, sadly time and tide has moved beyond the this portrait.

While the first half of this film about the Liston media circus is very good. Even with all of the recent docs on Ali, we've never really gotten a good look at the then Cassius Clay like we get here. Certainly we don't get a look at everything around him and the fight that we do here. Its wonderfully eye opening because it's material that is a portrait of a time made with out decades of rethinking.

The problem with the film is the second half on the Rumble In the Jungle, his s1974 fight with George Foreman.  That fight has been the subject of numerous other and better films including When We Were Kings which transcends being a boxing film to be something greater.

In the end this is a good film, not a great one.

This will play better if you haven't seen a lot of films on Ali.