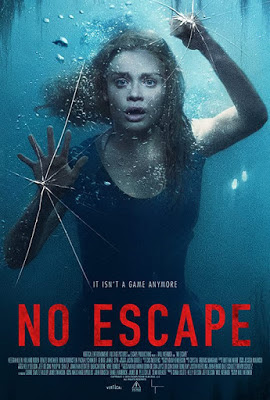 This is a neat little thriller of a type I don't normally like...

A YouTube video star celebrates goes to Moscow to celebrate his 10th anniversary online. Specializing in things that scare him his friends have set up something special... but things go wrong and everything suddenly is deadly. While the group manages to get free at first they are soon bein hunted by some scary guys with murder on their mind.

Even though this may echo other films (no I won't say what) this is so well done that you won't care. Actually this film is so well done with so many changes that even though it echoes it remains firmly on it's own two feet. In all seriousness this film ultimately is its own thing which gives it many many many points in it's favor.

High;y recommended- assuming you don't mind the red stuff.... NO ESCAPE is no out on VOD.